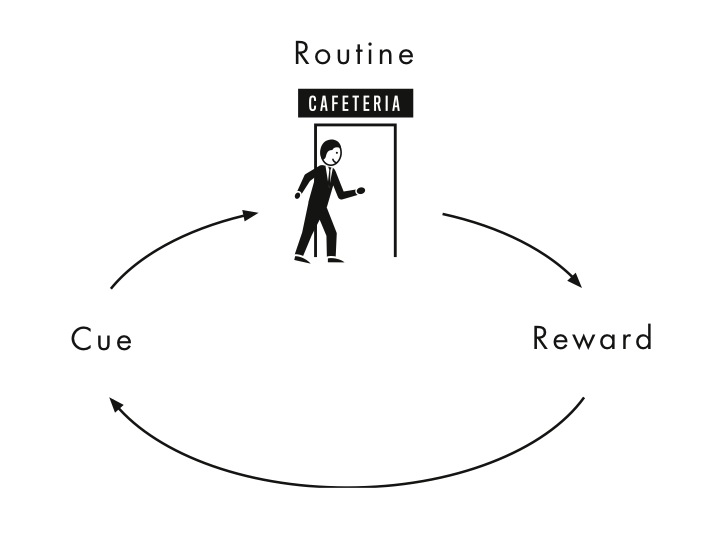 When it comes to altering habits, researchers and millions of people know that there is a golden rule:

You can’t extinguish a bad habit, you can only change it.

The habit loop–cue, routine, reward–can be reprogrammed, but we have to be deliberate about it. However, it is likely that most of us know we have habits that we want to change, but we aren’t fully aware of the cravings that drive our behaviors.

Let’s imagine that I had a job that required long stints of time during the day working at a computer on my desk. At various points throughout the work day (usually late mornings and late afternoons), I would find myself wandering to the break room to snack on the tasty treats that my benevolent co-worker decided to share with us.

Grabbing a snack, I took advantage of chatting with my co-worker about the ball game from last night. Then, after a few minutes, feeling satisfied, I made my way back to my desk.

Now, let us dissect the situation. If I took the time to really take an inventory of what may be driving my craving for a sugary snack in the break room, my motives might be less related to hunger and more related to just sheer boredom. (Remember, this is just a hypothetical)

When I finally realize that the sugary snacks are doing more harm than good, I decide I need to do something about my habit.

But, remember the golden rule: I can’t extinguish my habit. I can only change it.

How? Here’s the key, according to Duhigg.

Identify the cue. Keep the same reward. But insert a new routine.

Here’s what he means. Imagine it’s really a sense of boredom and desire for interaction that’s really the thing driving my craving to leave my desk and head to the break room. The cue is my boredom. The reward is my satisfaction with the brief release from work.

So, to shift my habit, I try a few new routines. The next time I feel bored at my desk, instead of heading straight to the break room, I get up and take a 5 minute stroll outside or maybe I allot myself 5 minutes on the internet to read up on last night’s game on espn.com.

Driven by the same cue, receiving the same reward (satisfying my boredom) does not have to involve indulging daily in sugary snacks.

This all sounds so easy, I know. But believe, the brain can actually be reprogrammed. We just need to know where to start.

Step 1: I would start by identifying the habits you wish to change. And then take a serious inventory of when you experience the cravings to satisfy those habits. This will take us one step closer to changing our habits.